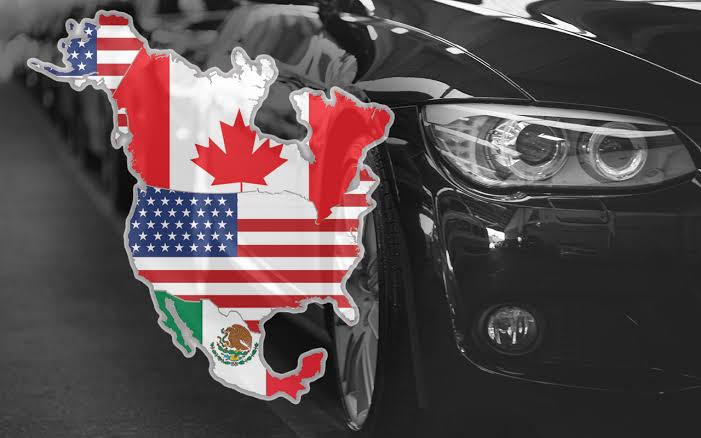 During Yamazen Mexicana's 5th anniversary event at our offices in Silao, Guanajuato we had the seminr presentation from Mr. Oscar Albín, president of the National Auto Parts Industry Association (INA A.C.), who presented details and details of the new rules of origin of the USMCA to more than 200 attendees. In order that nobody misses this useful information, below we share our article about it.

The North American free trade agreement, commonly known as NAFTA is changing. Now it will be “United States, Mexico and Canada Agreement ”called USMCA (or T-MEC, in spanish). And just as the name has changed the rules of operation also changed.

As is well known, the 3 countries that make up the North American trade block constitute an important economic zone, which is considered the third most important market in the automotive sector worldwide.

Let's start by indicating that in NAFTA 1.0 there is only one rule for light vehicles, heavy vehicles and automotive parts, which indicates that the value of regional content required must be 62.5%, 60% average respectively. That is, in the case of light vehicles and Pickups it should contain at least 62.5% of VCR, considering the production of any of the 3 countries belonging to the NAFTA block. 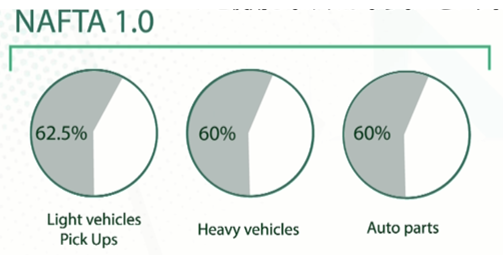 Now in the USMCA or NAFTA 2.0 this rule has been modified and additional rules have been added for light vehicles and pickups.

The ‘RCV’ or regional content value under the net cost formula will go from 62.5% to 75%. This change will be made gradually, establishing 66% of entry and increasing this index gradually over the next 3 years until reaching 75% of RCV.

It states that 70% of corporate purchases of steel and aluminum from vehicle assembly plants, better known as OEMs, must originate from any of the countries in the region.

On the salary index, which states that 40% of a light vehicle, and 45% of a pickup must be manufactured in Canada or the USA. for a workforce paid at least $ 16 per hour.

The formula can be composed as follows :

Important: Within the materials, OEMs may add imports of material and raw material that their Mexican suppliers make from the US or Canada.

This rule begins with 30% upon entry into force, and will gradually increase to 45% in the year 2024.

Light vehicles and pickups must contain 7 ‘Core Parts’, including their main parts called “Keyparts”. These 7 coreparts and keyparts must be manufactured in any of the 3 countries of the commercial block.

The details of the 4 previous rules apply equally for heavy vehicles but with the following changes; of 60% of VCR would go to 70% in a period of 7 years.

The salary index indicates that 45% of the value of the vehicle has to be manufactured in an area where labor is paid equal to or greater than $ 16 per hour with the same terms for pickups.

And 70% of the total of its purchases of steel and aluminum, will have to be from the region.

For the auto parts sector 3 categories have been created:

Axles, Chassis, Body, Motors, Steering system, suspension system, transmissions, and lithium battery. Currently the 'core parts' meet 60% of RCV, and with the entry into force of the USMCA this portion will have an annual increase, starting with 66% in its first year rising to 69% and 72%, until reaching 75 % in the last year.

3. Complementary parts with some changes

In case of not complying with these new rules, the corresponding tariffs will be paid to those established in the WTO, for the most favored nation.

Keep up to date with the latest news.